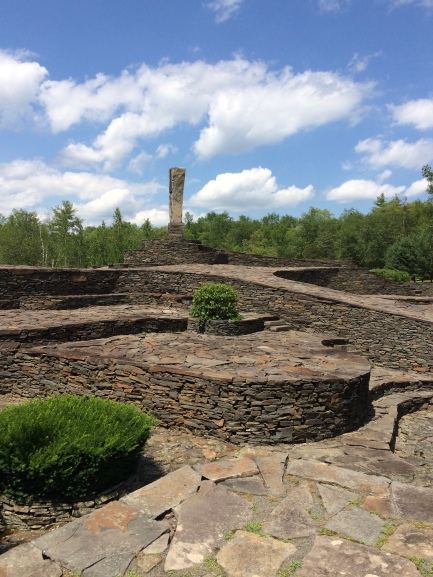 Opus 40, near Saugerties, New York, is the life work of Harvey Fite.   He bought the bluestone quarry in 1938, and spent the next 37 years constructing his Opus 40.

In the visitors’ center, we watched a short film about Fite and his work. 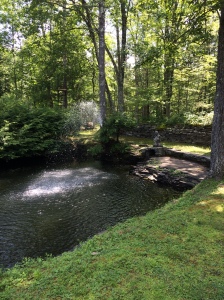 Beside the sheer size of this sculpture/stonework, I was most impressed by an aerial photograph of Opus 40.  There we could see the influence of the work Fite did in Honduras, restoring Mayan ruins.

Looking closely at the walls, I was amazed that Fite quarried and placed every single stone.  As we were leaving, we met a woman sitting on a golf cart.  It turned out that she was the wife of Fite’s stepson.  Pat lives with her husband in the house Fite built, and works to keep the monument a busy venue for visitors and concerts.

I wished that my father could have seen Fite’s Opus and his other sculptures.  My father was a sculptor whose work showed similar influences of his era: Arp, Noguchi, and Moore.  He would have enjoyed Opus 40. 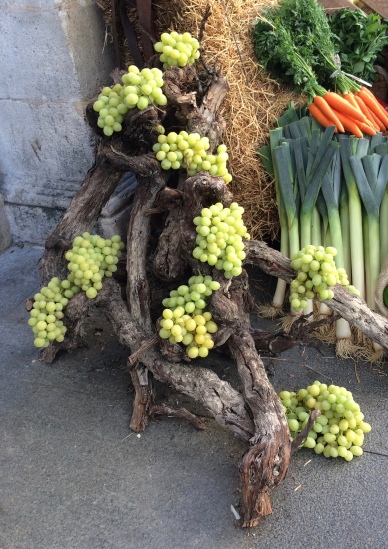 In the main plaza yesterday there was an abundant display of the local produce. I didn’t quite know what was going on, but I think several farms belonged to the organization that was showing off their crops.

At our place in Villa Horacia, we have things growing, too: bananas 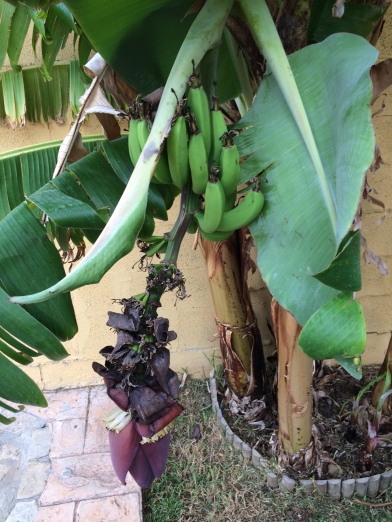 We are here only four more days.  I have found many things to love in Spain.  My eyes and heart are enriched.  I am grateful.

We took a tour of the Palacio of the Duchess of Medina Sidonia.  No photography was allowed inside the palace, so I have only pictures of the outside. The article below tells a fascinating story about the heiress and her efforts to protect the family archive. 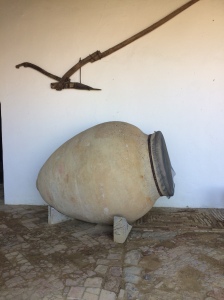 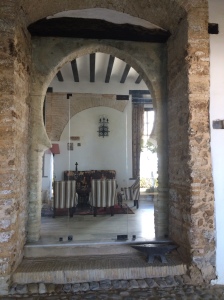 Luisa Isabel Álvarez de Toledo, the 21st Duchess of Medina Sidonia, wed her secretary of 20 years and left her in charge of family inheritance foundation

When an eccentric Spanish duchess married her long-time lesbian lover on her deathbed in 2008, the aristocrat’s three children saw it as the culmination of a betrayal of their right to inherit the family fortune.

Luisa Isabel Álvarez de Toledo, the 21st Duchess of Medina Sidonia who was known as the “Red Duchess” for her opposition to the Franco regime, not only wed her secretary of 20 years, Liliana Dahlmann, but left her in charge of the foundation she had set up to ensure that the family’s historical private archive be maintained intact.

As her lover’s widow and president of the Casa Medina Sidonia Foundation, Ms Dahlmann is now fending off a court challenge against the will by the duchess’s three children.

The children, led by the eldest, Leoncio González de Gregorio, 50, say that their mother did not have the right to sign away their legitimate inheritance of the family palace and archive as Spanish law guarantees a portion of at least a third of a deceased parent’s property for their children.

Mr González de Gregorio, now the Duke of Medina Sidonia, is asking for a third of the legacy for himself, with another third to be divided between the siblings. The duchess set up the foundation in 1990 after a financial dispute with her children, and, according to Ms Dahlmann, believed that having signed away her possessions during her lifetime, these could not be claimed by her children once she had died.

“Isabel wanted to protect the heritage so that her children would not sell it,” Ms Dahlmann told the judge in Sanlúcar de Barrameda in Cádiz province.

The duchess’s family can be traced back to Alonso Pérez de Guzmán el Bueno, the seventh Duke of Medina Sidonia, who led the Spanish Armada.

The family was divided after her children won a legal battle to stop her giving away portions of the estate at Sanlúcar, in Andalucia, in the Nineties.

The archive’s six million documents include a manuscript of the 13th-century Chronicles of Lucas de Túy and a record of the liberal parliament established in Cádiz in the early 19th century at the time of the Peninsular War.

A valuation ordered by the duchess placed a price tag of £44 million on the legacy, although experts from the foundation say it is impossible to value.