This bird is a hoopoe, also known as the “butterfly bird” because of the way it flies.  It comes daily to feed in our backyard in Sanlucar.   The hoopoe eats insects and spiders, which our bird seems to be finding in the grass. This blurry photo was taken (discretely) from our patio.  You can hear the hoopoe’s call on Youtube:

And learn more about it here:

I’m delighted that the bird flies over from Africa.  It’s exciting to be so close to that continent which also sends us its warm, sandy winds from time to time.

In the mountain above the city of Guadix, people live in house-caves.  The white pillars that you see sticking up are either air vents or chimneys.  We arrived before the museum opened, but a woman who was cranking out the awning of her store directed us to her “cueva”, to have a look inside for free.

Her husband was waiting to welcome us in.  He’s there in the photo, behind the gatepost. 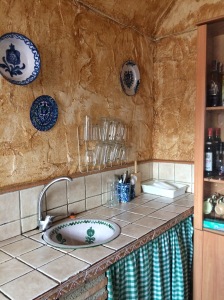 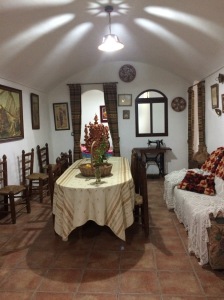 The man’s family has lived there for four generations.

We explored the church, also a cave dug into the mountain.

The Museum of Traditional Culture was a gem, situated in a cueva that was furnished as it had been in 1928 when the family bought it for less than $2.00.  We saw a film about the history of caves, from practical to religious.   The rooms were full of artifacts. 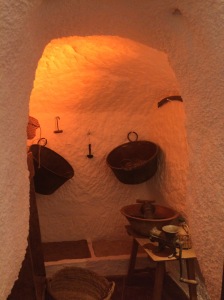 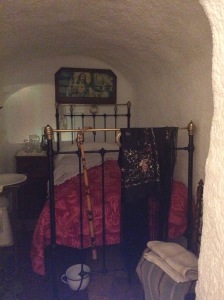 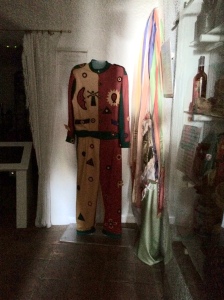 The caves of Guadix didn’t receive electricity until either the 1940s or the 1970s.  Either way, it made for a very dark residence.  There were only two openings to the outside, one, the front door, and two, a window in the kitchen.  The inside temperature was steady and cool.  The animals were kept in the rooms furthest away from the door.  Pigs.  I couldn’t imagine sharing a cave house with pigs.

This is a water spigot in a courtyard of one of the cuevas.  The cave village was the most tranquil place I’ve been in Spain.  It was quiet, clean, and had the feel of a spiritual community.

In fact, it was the home of Saint Pedro Poveda, whose cueva is also open to visitors, located next door to the museum.  The saint made many practical improvements in the lives of the very poor folk who lived in the caves in the early 20th century.  He died a martyr in 1936. 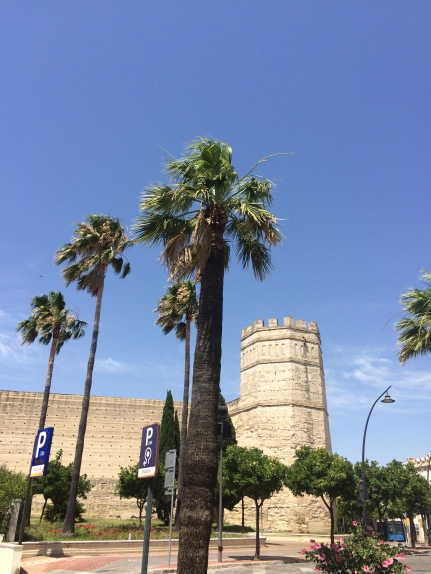 Sitting in a cafe across the street from the castle in Jerez de la Frontera, I stared at this incongruity for a while: palm trees and a castle.  Somehow my brain doesn’t put the two together.

Here is the lighthouse in Chipiona, with a cafe directly on the water.  We liked the look of this town, although it was still before high season, when it would be crowded with summer vacationers.

“Feed the birds, tuppence a bag—”    This gentleman is one of the regulars at the Plaza del Cabildo in Sanlucar.

These elders are regulars, too.  The woman with the glasses is the lead entertainment for her group.

Quite a “do!” on this rooster in the local pet store. 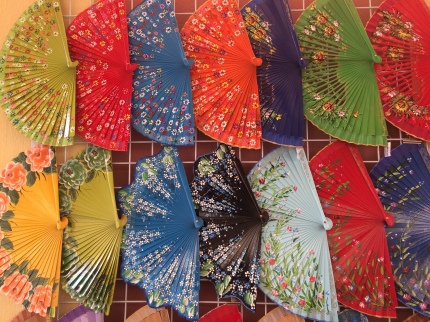 Aren’t they beautiful?  Useful, too, as the weather rises into the 100s.

Life in Yam Hill (Part I), by Tevin Hansen

Did you ever wonder what it would be like to live inside a giant potato?   Tevin Hansen wondered, and he wrote a whole book about it. Polly (Want a Cracker) and her good friend Bic (Lighter) know very little about the Old Earth that existed before the Great Unexpected Tragedy. But Polly’s adult friend, Jack of Hearts, has information about Yam Hill that could endanger all three of their lives.

Author Hansen has created a strange, orange world inside the yam, down to details of how people eat, dress, and dispose of waste. I was drawn in by the weirdness of the concept from the beginning. After the Elders showed up, things got really exciting. I can’t wait to read Part II! 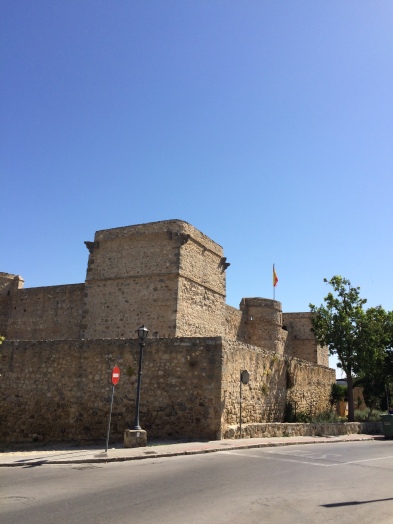 A short walk up from the lower part of Sanlucar de Barrameda stands a real castle right on the street.  Completed in 1477, the Castillo de Santiago was built by Don Enrique Perez de Guzman, the second Duke of Medinasidonia.  Most of the castle has been restored.  You can see “before” and “after” photographs in one of the rooms. 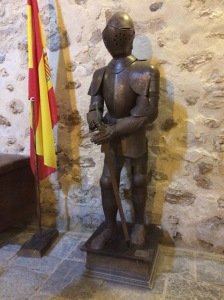 There was an underground passageway between the castle and the palacio of the Guzmans.  I think that is what is in my photograph below.  It certainly looks like a tunnel.

Being a great fan of mermaids, I enjoyed the Mermaid Gate showing a double-tailed mermaid protecting the coats of arms of the Duke of Medinasidonia and the Duchess Leonor de Mendoza.

In the winter, a local falconer brings his birds to the castle.  I hold a special place for raptors because of Archer, the gyrfalcon, in my book, Tangled in Magic. 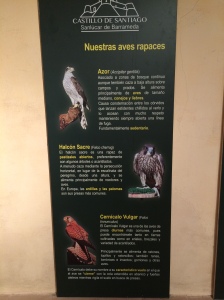 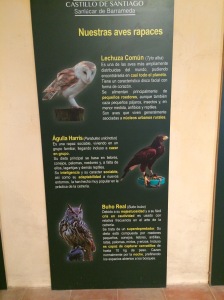 Yeguada de la Cartuja, outside of Jerez, is the main breeding farm for the Andalusian horses.  We took the tour and watched the show as part of my granddaughter’s birthday celebration.  Highly recommended! 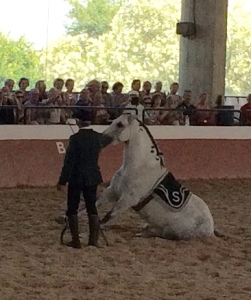 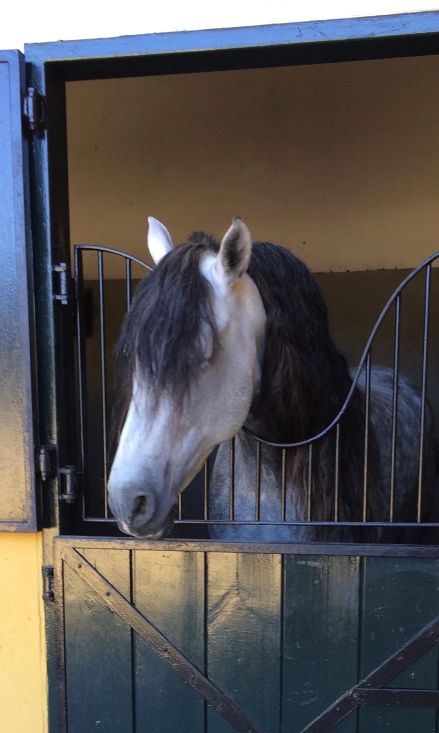 I enjoy the  many common gadgets and conveniences that the Spanish take for granted. (left) The light pole carries a second, lower set of lights so drivers can see when the light changes.  (right) Now that the weather is getting hot, the cafes have misting hoses strung through the umbrellas. 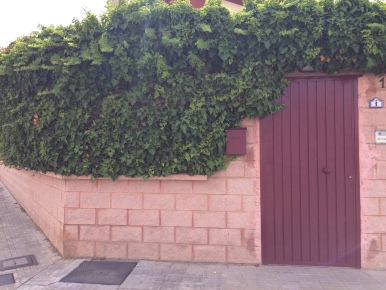 Houses are surrounded by living walls of ivy, bougainvillea, and grapevines.

We live across the street from two horses.  They trade locations, but the chickens and the goat stay in this paddock. 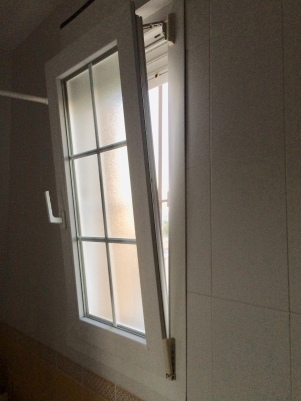 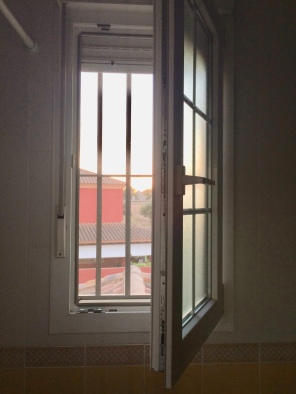 Windows and doors open two ways.  Is that brilliant, or what??

Note the bars.  Bars on all doors and windows except the front door.

In another failed effort to gain access to the Parque Nacional de Donana, I misdirected us onto a two-hour plus route to the far entrance of the preserve.  Rather than make the long drive around the park to the entrance at Almonte, we branched off toward Lebrija.  The guidebook announced a promising church, so we got the tower in our sights and started off.

We passed through this pretty plaza not far from the Iglesia de Santa Maria de la Oliva.

Sighting the tower–it was restored in 1999. 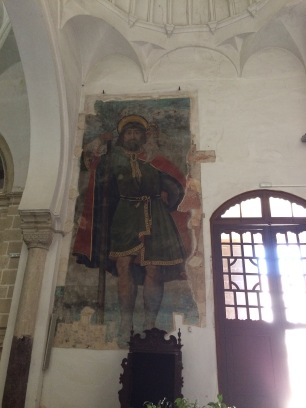 The altar—and a large fresco. 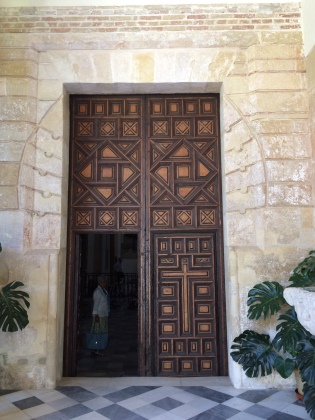 The doorway in the courtyard—-and the Mudejar (Moorish) tiling, surely the oldest part of the church that used to be a mosque.

We went on up the hill to the ruins of the medieval castle.

And then to the church on the very top, honoring the patron saint of Lebrija. 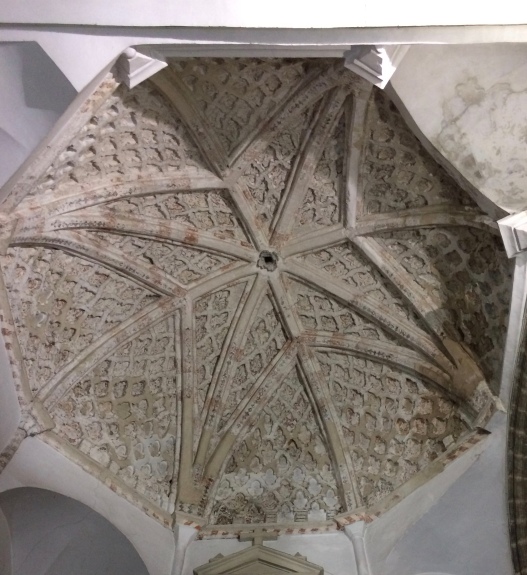 This ceiling vault was my favorite part.  The work must date back to the original Moorish building.

Today new friends took us on a tour of some historic landmarks in Sanlucar.  This is the portico of the Palacio de Orleáns Borbón (XIX Century), the summer residence of the Dukes of Montpensier and the current City Hall (Ayuntamiento).

The entrance to City Hall–pretty amazing.

And this is the ceiling….

We toured the gardens, with some really strange plants and trees.

Then on to the Palacio de Medina Sidonia, residence of the Dukes of Medina Sidonia. It contains the archive called of the Red Duchess (Duquesa roja), Isabel Álvarez de Toledo, considered one of the best historical archives in the world.  The Palacio is also a hotel.

We wandered into a hotel that was almost a museum.  Called the Posada del Palacio, it looks like a fabulous place to stay (below).

This was the first time we walked around the upper part of town.  The views were wonderful.