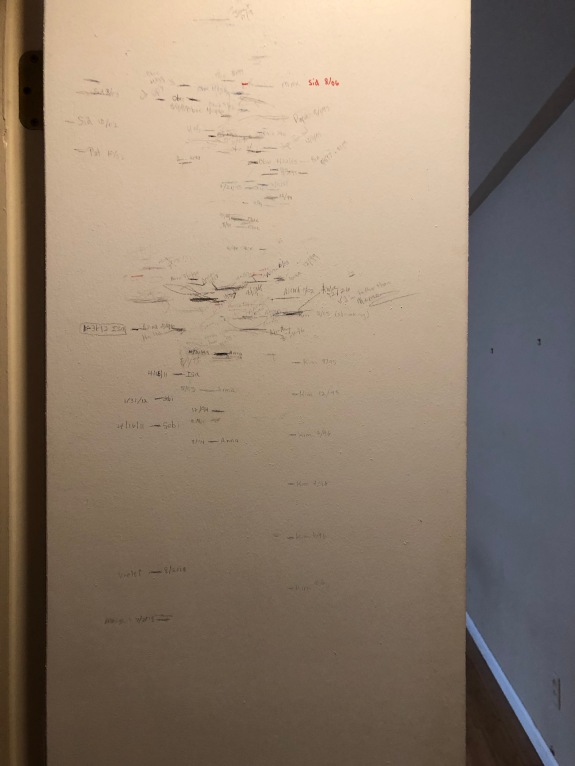 The couple who bought our house doesn’t have kids.  Maybe that’s why they chose to paint the closet door, our family growth chart that spanned twenty-five years.  To their credit, the Mrs. sent a message through our realtor: Did I want to take a photo of the door before she painted?

I already had. Nevertheless, it was a thoughtful gesture.

But I still felt sad.  Sad that the record of the kids would be erased.  Just last summer, I had added our two granddaughters and their cousin, marking their heights with pencil as they stood as tall as possible.

If I had bought a house with a marked up closet door, would I have done the same?  Or would I have studied the names, and mused over them.  Those faint pencil scratches represent noisy, busy kids, who crashed down the stairs, slid on the bamboo floors.  Argued, laughed a lot, left wet towels on the wooden chairs, claimed the last piece of leftover pizza.  One slept on the floor with his head in the closet.  One wrapped twinkle lights in her iron bedstead.

I think I would have left it untouched. 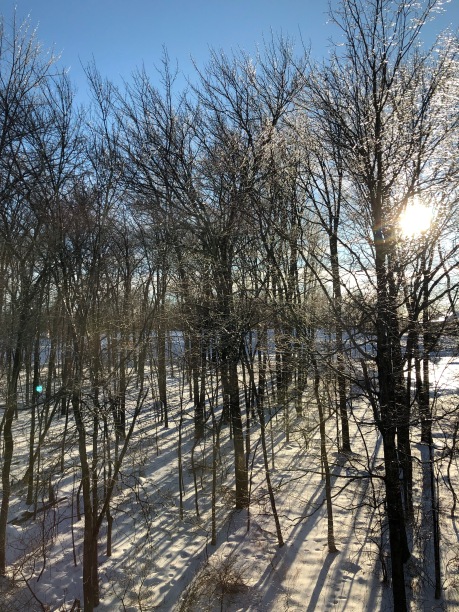 Last night I slipped on the ice.  The sidewalk in front of the library parking lot was unnavigable, so we walked in the street.  Neither of us was wearing white.  The cars’ headlights reflected off the patches of ice, showing us where it was unsafe to step.

When I fell, I banged a knee, and caught myself on my palm.  The sore knee didn’t last for long.  I was lucky.  This is the weather of broken bones.

Wondrous is the excuse to stay indoors.  Prevented from going anywhere by ice, snow, and single-digit temperatures, I’m allowed to slow down, to write a bit, quilt those pillow covers, and even do nothing much.

Meals tend toward comfort foods, root soups, polenta.  Why not oatmeal for dinner?  Hot applesauce.  And many cups of chai.

Wondrous, wicked, and waiting for spring.

What a poignant, sweet love story between two high school students.  Eleanor considers herself a misfit: she’s too fat and she has curly, red hair.  She wears the clothes she and her mother scrounge from thrift shops, and her real father’s left-overs.  She lives with her mother, step-father, and her younger siblings.  Money is scarce and step-father Richie is scary.

Park’s mother is Korean.  His father is a white American veteran. Park seems to be a misfit in his own family. When, on the first day of school, Park reluctantly offers Eleanor a seat on the bus, a seed is planted.  The two bond over Park’s comic books, and music.  Their relationship blossoms.  Eleanor tries to conceal her home life from Park.  Eventually, though…I won’t tell you more.

In searching for a copy of the book’s cover, I discovered a wealth of images and fan art.  Apparently Eleanor and Park is a popular novel, as well as a prizewinner.  Rainbow Rowell also writes The Runaways comic books for Marvel.

Read this one, if you haven’t already.  It’s really good.