(May the divine glance of the Guru ever dwell upon me.  It creates all worlds.  It brings all nourishment.  It has the viewpoint of all holy scriptures.  It regards wealth as useless.  It removes faults.  It remains focused on the Ultimate.  It is the highest ruler of the three gunas,  which constitute the world.  Its only goal is (to lead others on) the path of liberation.)

If you’ve ever read Elizabeth Gilbert’s Eat, Pray, Love, you might remember her ranting on and on about the early morning chant called the Guru Gita.  It’s one of my favorite parts of her book, because I, too, have felt the weight of those 182 verses.  And yet, I’ve been chanting those verses on and off for more than thirty years.

Only last week, on another quiet COVID-19 Sunday morning, we finished our regular meditation and decided we might as well chant the Guru Gita.

What a fortunate decision!  With nowhere to go, and nobody around to distract me, I sank into the familiar chant as if sinking into a warm, fragrant bath.  The Sanskrit tasted good in my mouth, like ripe, juicy fruit.  It felt like coming home. Why had it taken me four months of social isolation to start chanting? I wondered.

Later, I recalled something that (I think) was said by  Swami Muktananda. If your mind is too agitated for meditation, chant instead.

Chanting was what brought me into Siddha Yoga.  I still choose to listen to kirtan with Alexa or Spotify.  If the chant sticks in my head (I’m susceptible to ear worms), I don’t mind because the continuous repetition of names of the Divine is preferable to pop lyrics.

In Gilbert’s memoir, she solves her battle with the Guru Gita by dedicating it to her nephew.  The corona virus seems to have reopened a path for me.

When I was ten years old, I told my mother, “I don’t want to take piano lessons anymore.” She answered that she’d let me stop lessons, but added, “You’ll regret it when you’re older.”

At age nine, I had already begun playing guitar. After a few lessons from a college student, I learned to play enough chords to accompany myself as I sang. Although I’ve never gotten much better, the guitar has been a mainstay. But spurred by fantasies–I kept acquiring other instruments.

Sometime during college I bought a cheap dulcimer. It was little more than a trapezoid box with four strings. I tried hard but unsuccessfully to figure out the chords Joni Mitchell used in her recordings. Later, my first husband gave me an exquisite dulcimer. Made in Asheville, N.C., it had a matched wood back and friction tuning pegs (tricky). Its beauty did not improve my playing.

During my college years, I also bought a saz. What was I thinking? I probably got it because it was so pretty. This I never learned to play.

Another instrument attempt was a violin. I may have traded in my classical Aria guitar for the fiddle. I even took lessons from a master fiddler. My cat would be stretched out in a patch of sun. When I opened the violin case, he’d sit up in alarm. Then he’d bolt for the nearest exit.

Now let me pause here and say that I did actually practice these instruments—for a while. The desire to play didn’t carry over into the rigor of daily scales. My interest wasn’t focused and I’d drift away.

By this time, I knew quite well that musical proficiency requires obsessive practice. It didn’t stop my musical dreams. In Ireland, I bought a couple of pennywhistles and a bodhran (round Irish drum). At home in New York, a little red concertina caught my eye.

My most recent indulgence was a harmonium. I intended to accompany the chanting of kirtan. The instrument still sits in the corner of the living room under a yellow quilted cover. To play this particular harmonium, it must be lifted out of its box to rest on two tiny supports. That in itself makes access difficult. Soon after I bought it, the harmonium developed a sticky key. It’s not hard to pick out simple melodies on the keyboard. But, as with all my musical acquisitions, the harmonium languishes in the corner while I engage in my preferred creative pursuits.

We sold most of the other instruments when we downsized to the apartment. I still have my guitar, the harmonium, and a couple of pennywhistles. In my next lifetime, if I can’t be enlightened, I hope to become a proficient musician. 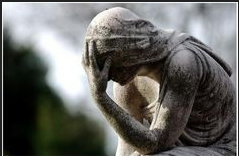 Years ago I read that sorrow affects the lungs.  The idea remained buried in a back drawer of my mind.  Recently, though, I’ve had cause to unearth this notion while dealing with a persistent health issue.

In December, while vacationing with my husband in California, I caught a bad cold.  Normally I would rest at home and kick such a virus in a few days.  My illness was exacerbated by an upended routine, long days of travel, and demands to be present for West Coast family gatherings during the holidays.

Three days before our flight back to New York, I realized that it was more than a cold.  My chest felt like it was imploding.  At the local urgent care I was given a “Z-pack” for bronchitis.  Things got a little better until the flight home, when the symptoms got worse. Back I went to another urgent care on a Sunday and was given another antibiotic.

Eight weeks later, I was still wheezing and tired, with stuffed sinuses.  The ENT specialist that I visited said I had a sinus infection and–you guessed it–gave me a third round of antibiotics.

The point of this narrative is this: in Traditional Chinese medicine, lung illnesses are connected with grief. 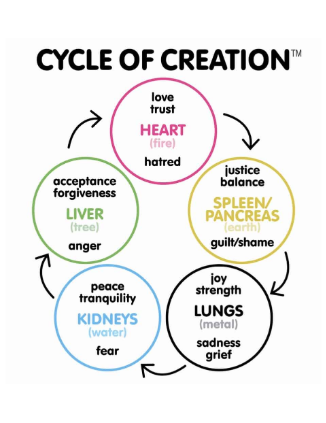 I’m a grieving spouse, having lost the future I’d imagined with a spouse who is no longer the person I married.  Although I keep active and engaged with caregiving and many activities, I live with an underlying river of sadness, that springs up into my eyes often, sometimes with the slightest surprising provocation.

Grief  must be expressed to let it go.  We can’t measure the severity of loss with instruments, but only by how strongly it is felt. Unexpressed grief harms the lungs.  Coupled with the all the other emotions that caregiving can produce (fear, anger, guilt–see above diagram), caregivers’ health may be threatened.

So how do caregivers cope and keep illness at bay?  Exercise, meditation, support groups, Emotional Freedom Technique (EFT)*, time with friends, religious practice: all of these help me stay healthy.

*more about this in another blog 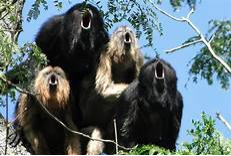 You’ve heard the expression “monkey mind” when referring to the distracting thoughts that jump like monkeys when one is attempting to be still.  These days, when I sit to meditate, I have an entire troupe of howler monkeys yammering and flinging themselves about in my mind.  I’ve been meditating for a long time, so I know the guidelines: when you notice you’re off the mantra, gently come back to it.

Maybe it was the familiarity of the process, or maybe it was the overflow of emotions, worries, plans, and obligations that have beset me since I’ve become a caregiver.  Whatever the cause, my former simple practice of repeating “Om namah shivaya” (the mantra of Siddha Yoga, translated as “I honor the Light within”) wasn’t working.

A teacher of a class we took introduced me to a different type of meditation/prayer. This method has proved to be helpful for me.  I’m mostly attracted to the feminine aspect of the Great Mystery/Higher Power, so I’ve amended the sentence “Be still and know that I am God” to “Be still and know that I am the Mother and the Light.”  For me, “Mother” encompasses divine love and compassion, while “Light” represents wisdom and clarity.  By offering my mind more to do, I’ve found a way to move those howler monkeys to a distant tree.

I hold my left hand in chin mudra, with thumb and forefinger touching.  The fingers on my right hand track the mantra and prayer by gently pressing my thigh as I silently go through the words, like this:

Exhale: Thumb–Be still and know that I am the Mother and the Light.

Exhale: Forefinger–Be still and know that I am.

Exhale: Fourth finger: Be still and feel my presence.

Note that the mantra can be any word or phrase that has meaning for you and focuses on Spirit. In the midst of full-time caregiving, this process has helped me recapture the deeper calm and solace of meditation.

Do let me know if you try this.  I’m curious to hear if it works for others.