We watched a major traffic drama in the center of town today.  The bus driver was obviously not familiar with the streets.  Too big to make the turn, and too big to go forward, the bus sat there with cars stacking up behind it.  The motor scooters slid past on the sidewalk.  Eventually the police showed up and pushed back the traffic so the bus could reverse.  Highly entertaining, as long as we weren’t in the bus or in a car behind it.

Our original destination yesterday was Laguna de Medina, a lagoon that is the stopping off place for migrating birds.  It seemed like a good choice for a Sunday, when all the shops are closed.  The GPS on our fancy rental car couldn’t handle the location, so we went to Medina Sidonia instead. 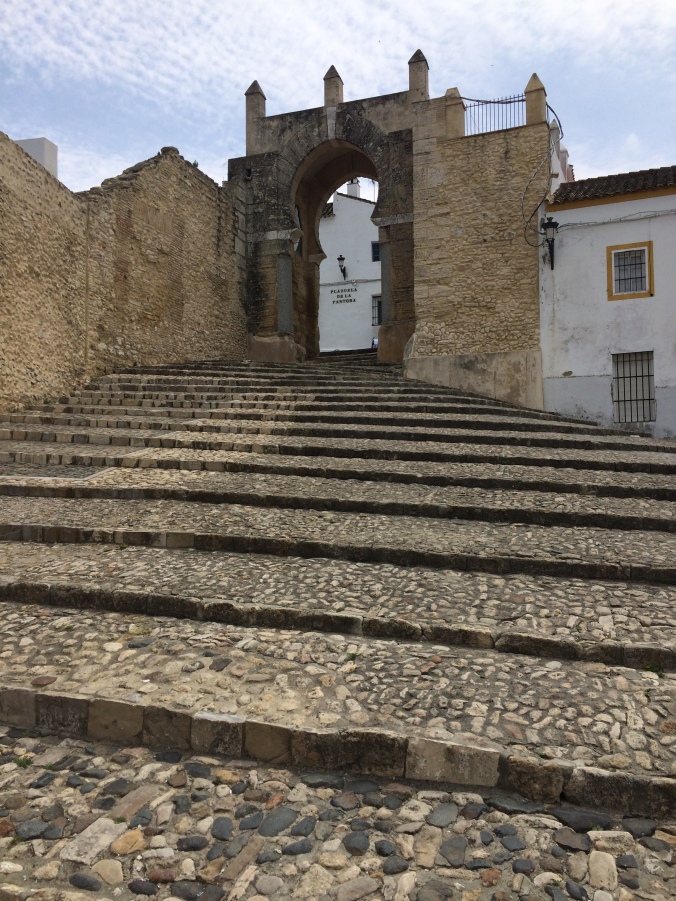 Good choice!  Medina Sidonia is a “pueblo blanco” on a conical hill.  Taken from the Moors by Alfonso X in 1264, Medina Sidonia became the holding of the Dukes of Medina Sidonia, whose job was to defend the territory between their town and the Bay of Cadiz.  The photo above shows part of the medieval wall that remains.

Here is Pat on one of the narrow streets.

The approach to the Iglesia de Santa Maria la Coronada.

The carved retablo of the altar.

There is Santa Maria la Coronada. 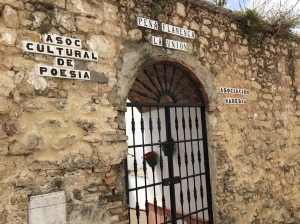 Two aspects of the town: I’m intrigued by doorways.

After visiting the cathedral, we were hungry.  I asked two women on the street where to find a restaurant that was open.  They pointed ahead and to the right, and followed us inside.

We ate lunch in the small pub with the locals.  The men at the bar were having a loud, animated conversation. 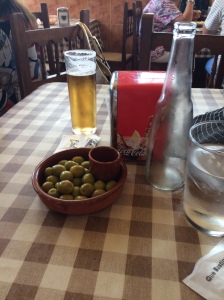 Here are the two women who helped us find lunch.

Medina Sidonia was a great find.  The weather was gorgeous, too.

The drive to Arcos de la Frontera is beautiful.  Those yellow patches you see in the background are fields of sunflowers.  As the road ascended to Arcos, the scenery began to look familiar. 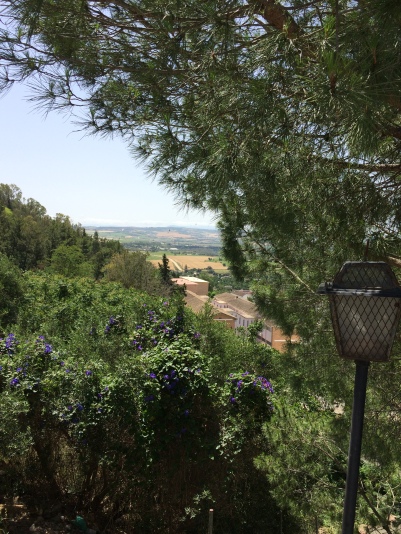 We’d been here before!  Ten years ago?  This is the view from the lower plaza where we parked the car. 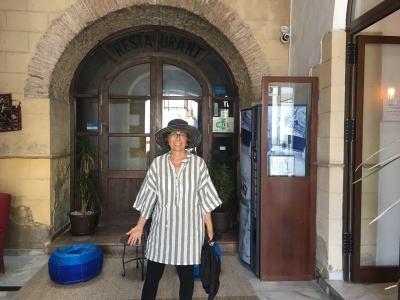 I’m standing in the lobby of the Hotel de la Fonda, where Pat and I stayed.  The management and the decor have changed.

Walking up the main road to the cathedral at the top, we passed many stores of local products: goat cheese, dulces arabes, honey, and fig cakes.

We did not go inside this time, but I remember well the glass case holding the mummified and dressed up body of a saint.  He had gold caps on his fingertips.

We stopped for “desayuno” at this cafe, the Taberna de Jovenes Flamencos.

Inside the cafe, the decor was all bullfights.  See the elaborate torero suits on the walls. 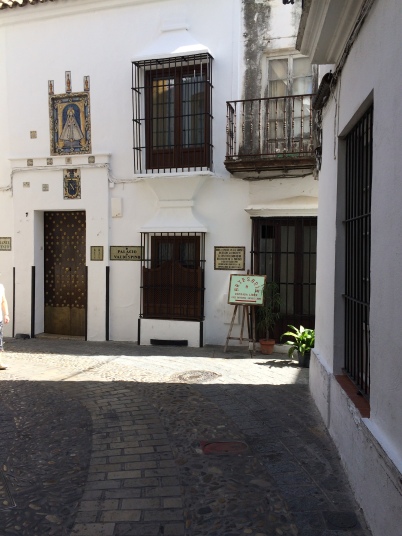 We’d also been to this store of local arts and crafts before.  We went again, admiring the watercolors, and the ceramics.

Leaving the city, I made a wrong turn and got us trapped on a dead-end hill, worse than San Francisco!  Pat took over and turned us around.  A little excitement at the end of a pleasant revisit.

This is a mostly wooden bicycle made in this workshop we passed on one of the narrow streets in the historic part of Cadiz.

These “dragon” trees are huge, maybe twenty feet around.  The Parque Genovese borders the ocean.

Here is another view of the Parque Genovese, showing the strong Moorish influence.

The fountains also are Moorish style. 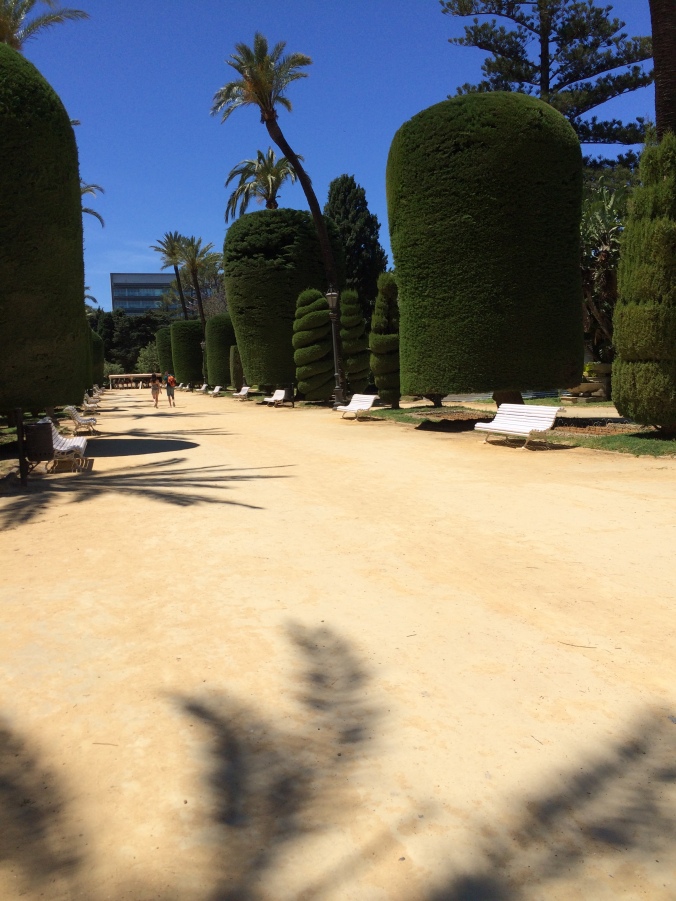 Cadiz claims to be the oldest city in Europe.  In 1100 BC, the town of Gadir was founded by the Phoenicians.  Since then, Cadiz has been occupied by the Carthaginians, the Romans, and the Moors.  New World wealth made Cadiz a prosperous city.

We enjoyed wandering the streets that opened into large or small plazas.  In one of the big plazas, the city market was in full swing.  On one side were the stalls of vegetables, fruits, fish, and meat.  On the other side were stalls selling all kinds of delicious food.  We chose to have vegetable crepes made by a harried vendor who ran out of ingredients.  I watched as she frantically chopped tomatoes and mushrooms, and kept telling me, “cinco minutos!”  The crepes were really good! 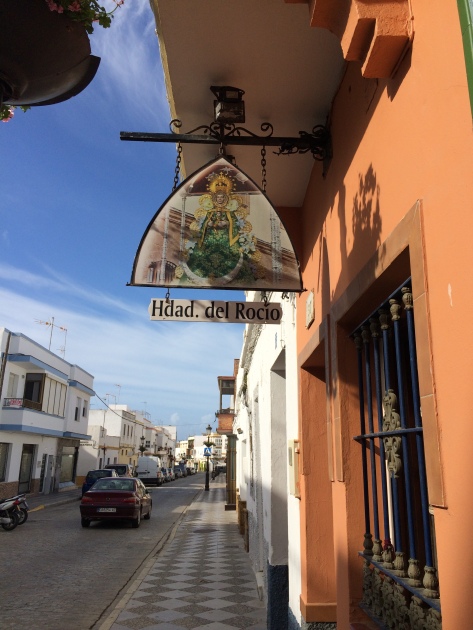 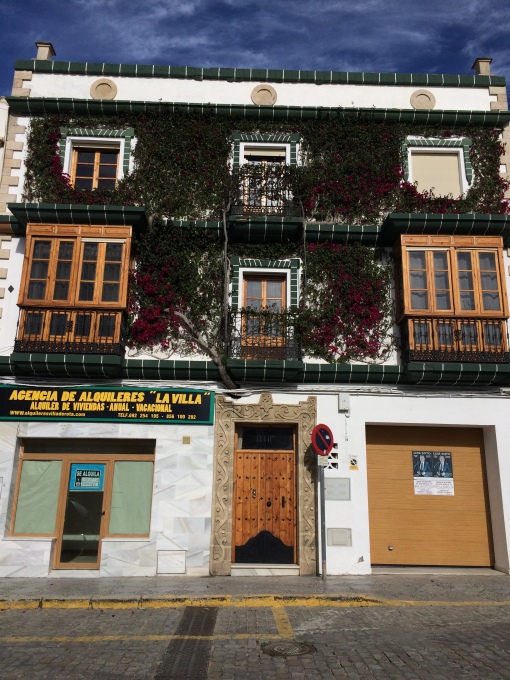 Look closely, the bouganvillea is growing out of the wall.

Every Single Second by Tricia Springstubb

Nella Sabatini, a sixth grader, lives in the Little Italy section of her town. She has a bunch of younger brothers. Her dad is the groundskeeper for the cemetery. Nella’s best friend is Angela. Nella adores Angela’s older brother, Anthony. They all attend the local Catholic school.

Then things start to happen. Their school is going to close and the building will become a health spa. Nella is confronted with murder, racism, Post Traumatic Stress Disorder (PTSD), and adults’ secrets.

Author Springstubb drops all of these issues on Nella, who has many questions about loyalty, friendship, right action, and love. Springstubb wraps it all up in a realistic, and fairly satisfying conclusion.

My only discomfort with the story, aside from the heavy issues, was the way the author included observations by Jeptha A. Stone, a statue in the cemetery. I wasn’t quite sure why he was needed.

If you read this book, drop me a comment. I’d like to know what others thought about it.

The town of Sanlucar de Barrameda is preparing for Feria.  Here are some sights from our walk today.

View in my current favorite plaza.

Entrance to a hotel

Kids rehearsing a skit for Feria.

Peeking into a bodega.

The knife and scissors sharpener