This author participates in our Review Exchange and Book Donation Program. Click here to learn more.

Tangled in Magic by Kim Ellis is the first book in the Karakesh Chronicles. Agatha’s twin brother Malcolm has disappeared, and she has strong reason to believe he’s still alive. She’s determined to find him, no matter the danger, and to stay one step ahead of the sinister warlock who murdered their parents. With a gyrfalcon at her side to lead her, she sets out to find Malcolm, but the journey won’t be easy as she encounters various travelers, who do not all have the best intentions, and confronts a dangerous panther. As she uncovers the truth about what happened to Malcolm, she also faces other dangers including Grassmen and dwarfs. All the obstacles she encounters are woven together to make her stronger. She shows strength and courage in everything she does, even helping strangers and putting herself at risk to do so. She also meets children she ends up helping, specifically a little girl named Rami who is in chains, and later a little boy. Their presence adds to a larger plot that finds Agatha as she’s going through her own journey in the background of her own situation, but also ties into her journey. She’s trying to free herself and so she goes to great lengths to help these children be free.

Ellis strikes a mirror between the present and the past with the warlock keeping a large presence throughout. Though he’s not seen physically, his presence is a constant threat seen through the stalking of a panther. Malcolm’s journal is key to unraveling the mystery of his disappearance as it chronicles his journey and gives insight into him as a character. The two animal characters of Archer and Carl are the primary companions who have a bickering dynamic in how they treat each other, which adds humor. Romance isn’t a major part of the story with only a sweet connection between Agatha and Garret, who is charming, but the real relationship focus is the one between her and her brother. It’s about their bond and how this plays into her determination to save him. Tangled in Magic is a fairy tale adventure with a daring heroine on a quest to save her twin brother, who faces a variety of dangers, meet travelers, and finds her own bravery. 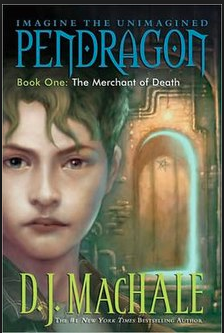 Pendragon  Book One: The Merchant of Death

In preparation for the sci-fi/fantasy workshop* I’m co-teaching this summer, I’ve been reading middle grade books in those genres.  From the first page of MacHale’s series, I knew what was coming:

…two things happened yesterday that changed my life forever.  The first was that I finally kissed Courtney Chetwynde…

The second thing was that I was launched through a wormhole called a “flume” and got jacked across the universe to a medieval planet called “Denduron” that’s in the middle of a violent civil war.

Reading this book as a writer, I was impressed with how much information MacHale packed into half a page.  We get the voice of the narrator, Bobby Pendragon, his approximate age, and the problem he’s going to face.  From the first page to the end, it’s one close call after another.

MacHale’s used an interesting plot device by alternating a third-person narrator recounting the events that Bobby’s two friends experience with Bobby’s first-person account in his journal.

For me, The Merchant of Death wasn’t a “can’t put it down” read, but it was good enough to keep me going to the end.

Omen of the Stars   Warriors: The Fourth Apprentice

By contrast, I ditched the Warrior cats book during the first chapter.  Maybe I’m suffering from an aging memory, and that’s the reason I gave up on this book.  Author Hunter threw so many new names at me that I became irritated.  Perhaps she was assuming that the reader (me) had read the previous series.  I hadn’t.  As a writer of a fantasy series, I’ve thought about this, and, in my case, I don’t expect the reader to know what came before.  A couple of sentences of backstory are helpful, and don’t slow things down too much.

Hunter has written several of these Warrior Cat series.  I don’t know how she keeps all the cats straight in her mind.  Admittedly, in the beginning pages, she provides a list of all the clan members and a description of each.  Even so, it would strain my reader brain to remember the differences among Briarpaw, Blossompaw, and Bumblepaw.

I did like that she included two maps.  For my own Karakesh Chronicles, I found that a map was necessary to gauge distances and directions.

Sometime this spring, the third book of the Karakesh Chronicles, Awakening Magic, will be published.  It’s my favorite of the five and will be available online at Amazon.com and Handersen Publishing.

This morning I watched the sky blush at sunrise.  Buddha wore a cloak of snow and a jaunty hat.  The deer we saw the first week we moved in seem to have retreated to the woods on the other side of the complex.  I saw one lone bird–a nuthatch perhaps–on a distant tree trunk.  Otherwise, it was all stillness.