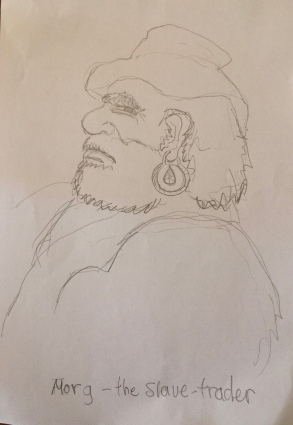 -my sketch of the dwarf Morg, in Book II of the Karakesh Chronicles

As I read about dwarves, I find the most interesting and creepy information in the descriptions of their origins.  The Norse mythology has dwarves either being created from the blood and bones of the giant Ymir, from whose flesh came the Earth. Even creepier is the other Norse myth that has the dwarves originating as maggot-like beings devouring the giant’s corpse.

Dwarves may go back as far as the beginnings of monuments like Stonehenge. Could their skill in stonework point to dwarves as the possible creators of the standing stones found throughout Europe?

Dwarves are found in both Germanic and Scandinavian legends. The Germanic dwarves live in mountains and underground. They are known for their skills in mining, smithing, and crafting, and have a reputation for wisdom. In the Germanic tradition, dwarves may have originated as nature spirits and healers, and some sources consider them a type of faerie. The concept of dwarves’ appearance depicts them as short, hairy, and ugly, but these characteristics may only be a recent development.

Scandinavian dwarves are metalworkers with a more sinister association with death. In some stories, dwarves guard the mountain doorways between the two worlds. They live in subterranean kingdoms full of treasure, and have magical skills, are able to forge enchanted swords and rings, and can make themselves invisible.

In both traditions, dwarves can be friendly to men, but if crossed, they are likely to seek revenge. They are also reputed to abduct children and young girls.

In my Karakesh Chronicles, the dwarves buy children to use as slaves in their mines. But not all dwarves in the Kingdom of Karakesh are immoral or evil. In Book II, the pureblood dwarves use the healing powers of gemstones to help others.

Which way do we spell it: dwarfs or dwarves? J.R.R. Tolkein, our supreme source of heroic dwarves, formed the second plural in error, and let it remain.

So what do you think? Are dwarves evil…or not?